The ITV series about extremely rich people in 1912 and their sweetly devoted staff of obedient servants always paid a certain amount of lip service to the inherent injustice of British aristocratic oligarchy, but not enough to make any of the moneyed characters retaliate, and certainly not enough to disrupt the show real reason to exist: coziness. 'The Crown,' for all its sumptuousness and elegance, will never make viewers truly love Britain royals, but this sweeping soap about compassionate lords and ladies and the underpaid staff they treat like family is the television equivalent of being tucked into a warm bed on a cold rainy night. For this theatrical sequel, set in 1927, two years after where the series ended, creator-screenwriter Julian Fellowes and veteran TV director Michael Engler ('Downton Abbey,' 'Six Feet Under') have delivered a densely packed two-hour episode that manages to touch on the lives of every main character (and there are over two dozen of them) and weave together what would amount to a season worth of narratives.

Watch video: 'Downton Abbey': The Crawleys Welcome King George V in Film First TrailerThis thing is packed with incident, including -- and what follows are the sort of details some fantasy league aristocrats might not want to know, so do please stop here if, dearest reader, that applies to you -- a visit from King George V and Queen Mary that sends Downton into a flurry of activity; a concurrent visit from a mysterious stranger who has plans for Irish former-chauffeur-and-revolutionary-turned-class-traitor Tom Branson (Allen Leech); a servant rebellion when the Royal staff and chef barge into Downton like they own the place; pre-wedding tension for cook Daisy (Sophie Mc Shera) and footman Andy (Michael Fox); a pregnancy for the endlessly beleaguered Lady Edith (Laura Carmichael); a clandestine gay rendezvous for butler Thomas Barrow (Robert James-Collier); an inheritance battle; a family member with a secret identity; a thief on the loose; a distractingly hot plumber; and an announcement from the Dowager Countess (Maggie Smith).

It quite a lot, and the challenge to keep all the characters in play at the same time -- they are frequently clustered in one room or, when on the move, crossing paths through a scene so that every actor gets a line or two -- diminishes the emotional resonance the series achieved through famous storylines such as the blossoming romance between valet Mr. Bates (Brendan Coyle) and lady maid Anna (Joanne Froggatt).

The cast slips back into character easily, but no single person is given all that much to do, save for Smith, whose snooty quips always steal scenes, and would appear to be Fellowes' favorite writing exercise. 'Also Read: 'Downton Abbey' Creator Julian Fellowes' 'The Gilded Age' Moves From NBC to HBOSo this is fan service as painstaking as any Marvel installment, and you are expected to bring your well-studied knowledge of deep bench characters and all your reserve emotional commitment with you.

A piece of Royal Mail is followed like a bullet from a John Woo gun through train travel, hand sorting, and finally a breathless, white-gloved delivery. Also Read: Epix Picks Up 'Belgravia' Limited Series From 'Downton Abbey' Creator Julian FellowesAnd that, of course, is its real genius, its insistence that the haves and have-nots can somehow form a family where genuine care is overtly on display, where service and authority are just costumes to be discarded when its time to behave like real human beings, and that love never fails to have the easy advantage over exploitation. 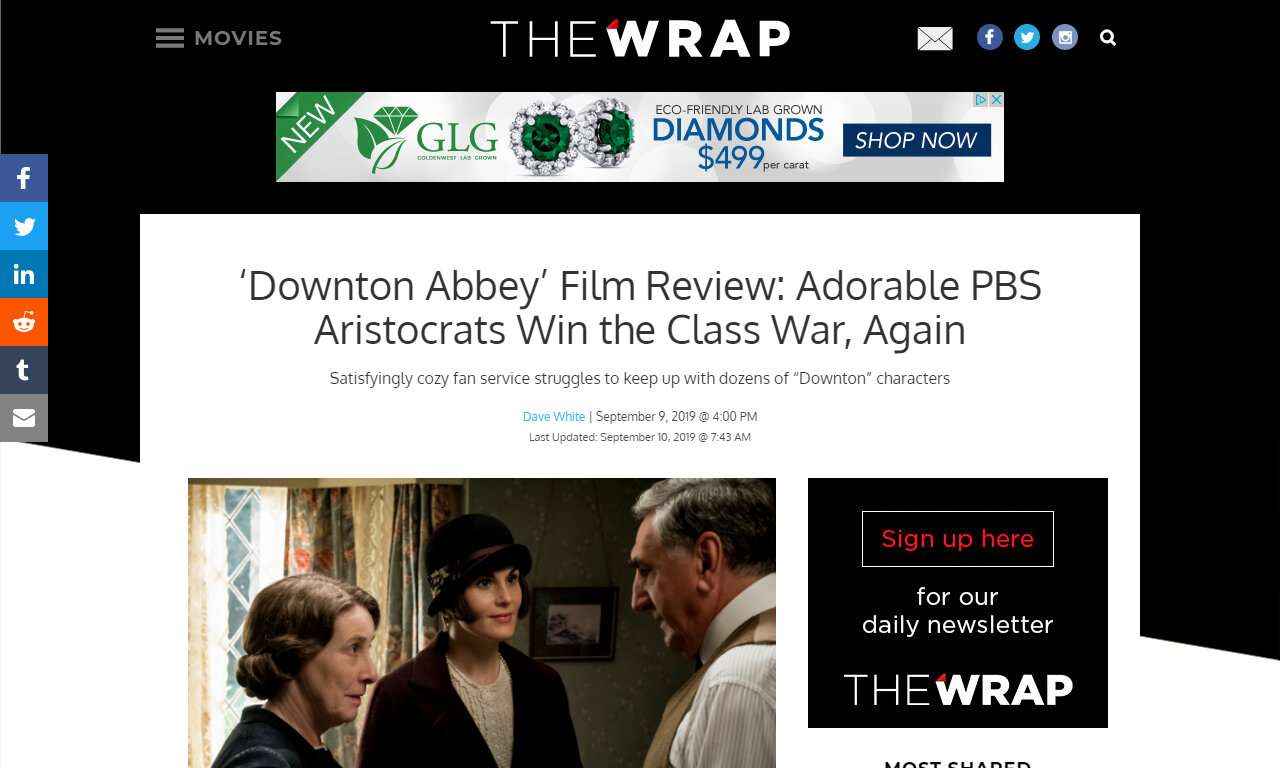